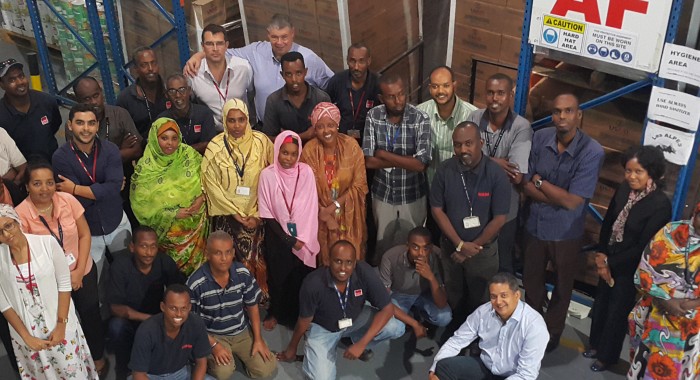 Some of you may have had the pleasure of meeting the BMMI Djibouti team. They consider themselves a ‘family’ and operate through a set of shared values that are fundamental to everything they do.

Leading this team is Country Manager, David Hanse. David is an enthusiastic and passionate leader. Our colleagues are a group of strong and talented people, but making them work effectively together is a different task. As a leader, that is exactly what David does. The team works cohesively together in order to perform better.

The three-day visit, which took place earlier this month, was to introduce Marek to his colleagues, and give him the opportunity to learn more about BMMI Djibouti, as well as take a tour of the facilities.

During his visit, Marek visited the container terminal, met with important representatives and go to see the first mall construction in Djibouti. However, it was the team and David’s leadership that left an ever-lasting impression with Marek.

“David’s leadership allows an environment where ideas and people flourish,” he said. “When employees collaborate and feel empowered that’s when they work their best.”

Olivier also praised the team in Djibouti. “I have had the great pleasure of visiting David and the BMMI Djibouti team once again,” he said. “I was very pleased to meet our colleagues who are always smiling, are very enthusiastic and are always ready to go the extra mile to make things happen. In turn, this makes BMMI Djibouti a success story in the horn of Africa.”

Recently, the team visited the BMMI Bahrain offices for Vision 2000 training. Amina Abdi Souleiman, Lalanirina Randrianantenaina and Vipin Sagar made a month long visit to Bahrain in order to familiarise themselves with the financial accounting and management information system.

Whilst in Bahrain, the three worked double shifts and attended training during the day, and once it was over they ensured that all their emails were checked and deadlines were met. Whilst the trainees were away, the team in Djibouti did an excellent job managing the fort and ensuring that operations were running smoothly. Marek reinforced the fact this is all down to David and his leadership style that increasingly embraces and celebrates teamwork where it’s about creating a star team rather than just star employees.

Robert also shared some kind words about the team in Djibouti. “I have had the pleasure of visiting Djibouti since 2003 and have personally witnessed the team grow and develop into star performers,” he said. “It remains one of my favourite places to visit, not least because of the personal pride associated with seeing a business grow from nothing to where it is today, but also the great personalities associated with the team. They make everyone feel welcome and their passion is infectious.”